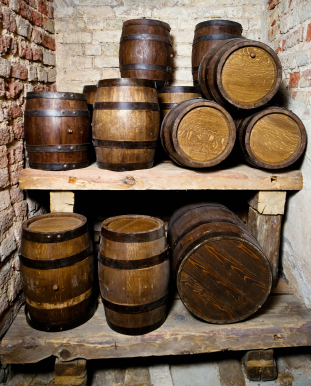 One of the most important steps in producing high-quality, fine-tasting wine and spirits is barrel aging. Once spirits have been barrel aged for several years, they’ll have had the opportunity to acquire flavors from the wood that the barrels have been made of. The most popular option in wood for barrels is oak, although certain wines and liquors require other kinds of wood to provide flavors that are specific to their composition and expected taste.

Determining How Long A Liquor Should Age

The easiest and most obvious way to determine the age of liquors is by simply reading their labels. If these have been aged in an oak barrel for a number of years, manufacturers will usually state this on the label as proof of their oak barrel aging process and its quality.

If there is no age revealed on liquor labels, this likely means that the distillery does not have any specific guidelines for oak barrel aging and has instead used its own methods for improving the flavor of spirits and aging them. As an example, Maker’s Mark undergoes barrel aging for approximately six years before it undergoes a taste test and is either approved and processed for sale or aged for an additional amount of time.

How To Determine The Age Of Blended Liquors

When mixed liquors are sold, they are labeled according to the liquor that has been aged the least amount of time and any other included liquors will have been aged for at least that time or longer. A scotch that is 25 years old could contain liquors that have been aged quite a bit longer than 25 years.

The top contributing factor is the local climate of the region in which liquors are being aged. Cold climates make it necessary to barrel age liquors a bit longer. As such, whiskeys are usually barreled in the north and are therefore aged a bit longer while tequilas, which are produced in Mexico, and many rums which are products of the Caribbean and South America are usually barrel aged for a much lesser amount of time due to higher local temperatures. When climates are colder, oak barrel aging and other forms of barrel aging take a bit longer to produce an optimal-tasting liquor. The process is sped up by warm temperatures. It takes just two or three years for a good tequila to become ready for consumption. Rums can be made in many different climates given that they are produced all across the globe. Due to this fact, the length of the barrel aging process is determined by the area in which the liquor is produced.